on september 19th, professor yu jinquan from the scripps research institute of the united states came to shanghai raas at its invitation for academic exchange and visit. she also delivered an academic report on “activation research on the carbon-hydrogen bonds and its applications in new medicine development and total synthesis of natural products” in the lecture hall on the second floor of the administrative building. deputy general manager mr. xu jun, mr.hu weibing, miss shen jihui and mr. lu hui, general manager assistant and director of legal and medical affairs mr. zhou bo, along with all staff members of department of legal and medical affairs and department of research and development were present at this meeting presided over by mr. xu jun. chairman of the board of shenzhen hua ye new material co.ltd. mr.zhang mingdong, deputy general manager of shanghai kai bao pharmaceutical co.ltd mr.xue dongshen also attended this meeting at sincere invitations. 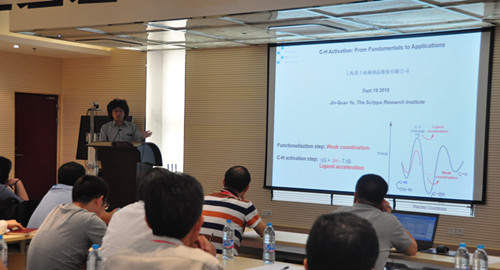 (pro. yu is elaborating on the outcome of his activation research on carbon-hydrogen bonds.)

during the academic report, professor yu elaborated and shared the outcome of his research on the activation of carbon-hydrogen bonds and its application prospective in medicine research and development in simple words. he has carried out pioneering research on the selective activation of carbon-hydrogen bonds and has achieved great breakthroughs in enhancing the efficiency, specificity and practicality of palladium catalyzed reaction, which contributed to the enormous extension of space range of direction groups and carbon-hydrogen bonds. professor yu used modified amino acids as “transient guide groups” for the ketone and aldehyde based substrate. these amino acids could automatically attach themselves to the target compounds and separate automatically, available for continuous ad repeated use. this contributed to the simplification of the previously time-consuming preloaded guide groups process, allowing for a reduction of reagent dosage required. his unconventional method altered the fixed way of organic synthetic chemistry, breaking the long-existing technical bottleneck in this field, opening a new door for the advent of numerous multifunction compounds of practical benefits in the academic, chemical and medical world.

after the report, professor yu started a heated discussion and communication with the participants and offered detailed explanations for the questions.