under the recommendation of the biology park of fengxian district, the deliberation of shanghai joint meeting of foreign recognition and evaluation, and the approval of shanghai foreign affairs office, the director and deputy general manager of shanghai raas mr. xu jun has received 2016 shanghai magnolia memorial award as a recognition of his contribution to and social influence on the field of public health and medicine in shanghai. shanghai’s municipal government has successively established “magnolia memorial award” “magnolia honorary award” and “honorary citizens of shanghai” since 1989 in the name of magnolia-the city flower of shanghai, to recognize those foreign experts and friends who have made positive contributions to the development of friendly exchange and cooperation between shanghai, economic construction and social advancement of shanghai. 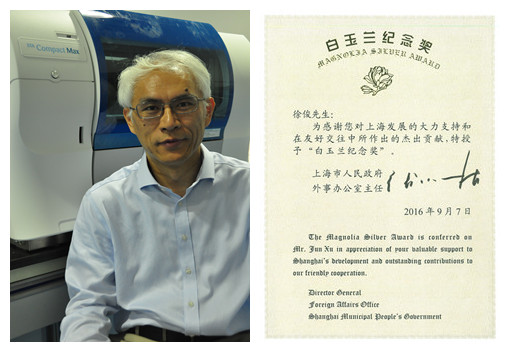 “there are over 3000 varieties of already-known proteins in human blood and their respective use has been discovered through research. then they’ve been produced for clinical treatment.” this is what occupies mr. xu every day. the research led by mr.xu has found 6 original products such as the immunoglobulin for liquid intravenous injection after virus inactivation, clotting factor and so forth, providing safe and quality blood products for thousands of hemophilia patients and others. xu once worked in howard hughes medical institute, oklahoma medical institute for medical research in clotting and inflammation, received 3 patents in the u.s and published over 20 papers, one of which described the method of treating hemophilia using monoclonal antibodies and its research outcome has been put into clinical practice. the mechanism that the inflammation and clotting reaction mediated by extracellular histone in blood circulation could cause death for septicemia patients was discovered by xu in 2009, exerting profound influence on the medical world. it has been cited over 500 times. other institutes, including harvard university have proven the pathogenic factors of extracellular histone in multiple serious diseases such as stroke thrombosis and tissue damage, etc.

anti-histone antibodies for treatment uses will be studied and applied in an extensive manner in such diseases with high mortality rate as septicemia and so forth. as a member of the asian biological blood products steering committee, xu is responsible for the technical exchange in international business and has made great efforts in promoting the internationalization of the company.

since october, the achievements and contributions of the award winners of three kinds, namely, “magnolia memorial award” “magnolia honorary award” and “honorary citizens of shanghai” will be shown on the led screens in the bund and shanghai central business district as a further recognition of their remarkable contributions to shanghai.

two decades ago, the then major of shanghai, mr. xu kuangdi presented the “magnolia honorary award” to the then deputy general manager of shanghai raas mr. huang kai. and today, director of shanghai foreign affairs office, mr. zhang xiaosong presents the “magnolia memorial award” to the director, deputy general manager mr. xu jun. this is not only a recognition to individuals themselves, but the highest honor for shanghai raas, fully recognizing the efforts made by shanghai raas in the promotion the economic construction, the advancement of public health and medical services as well as in assuming social responsibilities of enterprises in the past years.